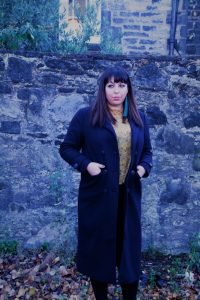 If I had a panic attack, I did it in the toilet at work, then went back to writing the news until 5am – working alone on a night shift.

On her mental health

When I was 19, I was diagnosed with depression and anxiety disorder. There were a great many base issues which contributed to this, but I think a turning point was when I became quite ill with E.Coli. I was working in Tanzania, and living in a remote village without easy access to healthcare. The team I was working with and the doctors who helped me did an amazing job, and I was extremely lucky – I know that. But that said, I came as close to death as I ever wish to be. There were some knock-on effects from the treatment which gave me serious health problems, and whilst I was recovering, I was exposed to two separate, traumatic incidents: a car accident and a local insurrection. Smashed windows and machetes. Guns. This all happened within an eight-week time frame, and was my first experience of travelling abroad alone. The experience and its ongoing complications lasted for many months, and I started having severe panic attacks and fell into quite a serious state of depression.

I eventually went to the doctor about six months later when I was back in Edinburgh and getting worse by the day. My mother convinced me that I had to. I remember – I was doing a naked photoshoot for charity (as all stereotypical students seem to nowadays), and I was getting ready in the bathroom when a huge clump of my hair fell out and landed in the sink. It had been coming out with stress, and the other girls looked at me with horror. I burst into tears, had a huge panic attack, and called my mother. The doctor was great – she put me on medication to treat the anxiety and depression, and I stayed on it for eight years. It changed my life, and made me realise that poor mental health wasn’t something I just had to endure. I decided to come off it this Christmas, because I feel like I’m in a place where I have other ways of coping, and my anxiety level is much more manageable. I have been practicing CBT and have attended therapy, all of which has helped me enormously.

Until the age of 24, I kept the fact that I lived with anxiety and depression a total secret. The only people that knew about my diagnosis, or even my experiences, were my mother, my best friend, and my partner. I was scared I would be judged, scared I would be penalised at work (since I worked in a high-pressure newsroom on a freelance basis) and scared that people would treat me differently. If I had a panic attack, I did it in the toilet at work, then went back to writing the news until 5am – working alone on a night shift. It was such an awful, lonely time. Then, I realised: why am I doing this? If I had a cold, I wouldn’t run to the back room to sneeze secretly. If I broke my leg, I wouldn’t hide my cast with a long skirt and pretend to walk as though I wasn’t in agony. I also realised that if I wasn’t honest, then this will be the standard forever. Don’t talk, don’t tell. So I started speaking up, answering honestly, and writing. It was so scary to do so after so long, but now, I find it liberating.

I’ve written for Marbles magazine in more detail about the reasons I decided to stop keeping such a big part of my life a secret. I’ve also written short stories and poetry about my experiences, and this helps me to take control over some of the things that have happened in my life. Being creative lets me think about mental health in new ways, and to be honest about my experiences in a way that could generate more much-needed discussion. I’m not ashamed of anything anymore, and I’m proud of how far I’ve come.

It’s back to the hair thing, really. I went home for a little while after that, just to get some headspace. I was very self conscious of how my hair had thinned, and would keep asking my Mum and my sister about it: can you tell? Will it get worse?

After a whole day of it, mum decided to take us to the cinema as a distraction technique. We were in the car on the way there, and one of those extended infomercials came on the radio, talking about pills for hair loss. Shampoo for hair loss. Combs for hair loss. We couldn’t change the channel – it was stuck. Every time the advert seemed like it would end, it just started again (you know the JML sorts). Eventually, it got so ridiculous that we all burst out laughing and couldn’t stop.

I would like people to take triggers seriously, even if if they seem silly to someone else.

Meat expiration dates really set me off. So does undercooked food and food left out for too long. My anxiety was caused by the E.coli incident, and even a decade later, I can’t really get over my fear of it happening again, or the memory of it having happened at all.

So, if it’s the 23rd and the beef expired on the 22nd, please don’t get exasperated when I say I don’t want to eat it. Don’t tell me how these dates are a marketing technique, and how, look, it’s fine, you can smell that it’s fine, and that I’m overreacting. I have that information and I understand it, but it doesn’t help. I totally get how it seems silly to people who know a lot about food packaging and manufacturing. And I understand the concern of food waste completely – I hate that too.

But I know how it ends. If I eat that beef, however completely fine it seems to another person, I get chest pains. I get a knot in my stomach, panic attacks and tears. I feel on edge for 24 hours, until my body has proved to me that it was, in fact, OK to eat. And when you boil it down – that’s the deal I’m making just to eat a burger.

I’m not saying I want to live with that trigger forever, and just let it be a part of my life. I’m working on it every day with CBT, but it’s a process. I hope that one day I’ll be able to eat from the reduced section without fear. But I’m not there yet, and telling me that I’ve nothing to worry about and to just eat it – that’s reductive.

Some people’s triggers may not be logical, but when it comes to anxiety, logic rarely wins the battle. I’d like people to remember that more. Triggers are hard to admit and even harder to live with. I’d like people to fight the urge to lecture someone on how they should just get over it. Be a pal.