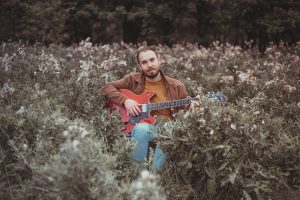 Pizza is delicious, and good pizza can cure all manner of ills.

In the first of our online series of short interviews, we’re having a chat with Harry Harris. Harry’s a Marbles contributor, writer, and singer-songwriter. Get your ears around Andre the Giant and Greyhounds Greyhounds Greyhounds immediately. Harry will be speaking as part of our event at the Edinburgh Science Festival’s Wellbeing Cafe on Sun Apr 1st.

On his mental health

I’m lucky in that my mental health is on a relatively even keel. I have no diagnoses and have never had a spell bad enough to warrant getting checked out. I have flashes of anxiety triggered by certain things – usually finances, or some past trauma (I had a small car crash a couple of years ago which, though a minor event in the grand scheme of things, does make getting in a car trickier than it used to be). My last couple of months living in London was probably my worst spell, however since moving to Edinburgh and refocusing my life quite radically I think, hope, the worst is behind me.

I only occasionally write about my own mental health, purely because I feel there are other people whose experiences are more valuable. However, I feel like it’s a subject I come to as a songwriter quite a lot, sometimes unconsciously. Each of the four songs on my last EP, Andre the Giant, was about characters in the midst of a crisis, trying to hold it together. The final track, ‘When We Won the Indy 500’, is directly about someone trying to get their partner out of a bad spell, through the means of breaking onto a racetrack and doing some laps — a true story!

Back when I was living in London, I woke up knowing that it was going to be a bad day, so I took the day off work (another thing everyone should do if they’re feeling sketchy – you probably won’t get fired, it’ll be fine). Cooking is a great help for me, because of the focus and the preparation and the routine, so I wanted to make something that would be fairly time consuming. Someone on Twitter suggested pizza — the bonus here is that pizza is delicious and good pizza can cure all manner of ills. So, I’ve made the dough, and as I began to knead it, and felt it kind of coming together, I literally just burst out laughing to myself in my flat. It was like a huge weight had lifted and I had no idea that was going to happen. So in conclusion: pizza is a fantastic cure for mild anxiety.

I think in the conversation around mental health, recognising it as a serious issue, the word anxiety is used as a bit of a catch-all term for what is really a broad spectrum. From my point of view, I feel like my issues with anxiety are analogous to getting a cold. Everyone gets a cold! Some people more than others, brought on by a mix of factors — lifestyle, environment, whatever. Other people’s anxiety is more debilitating, a flu that can keep you in bed for days, or worse. Part of the normalising of mental health issues is to afford each case a relative amount of seriousness, to recognise the times when issues can be combated with self care, and when they need more robust intervention.

On what he’s up to

I recently put out a new EP with my beloved feminist folk punk trio GREYHOUNDS GREYHOUNDS GREYHOUNDS, it is called The Attagirls! EP and features four scrappy songs about vengeful swamp witches, rebellious nuns, female fighter pilots in World War II, and Countess Markievicz. You can listen and throw us some coins at yeahgreyhounds.bandcamp.com, and my previous non-Greyhounds Andre the Giant EP is over at harryharris.bandcamp.com, where you can buy an accompanying mini graphic novella, which is really much more beautiful than any of the songs are.