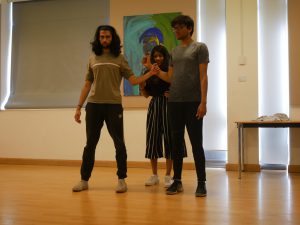 Light vs shade and bright vs dark are played with throughout Rights of Passage. Three main characters are dressed in black, while the others – mainly their detractors – are all-white jeans and tees. The lighting flickers on and off at times of high emotional stress, while pure darkness is used when all hope seems gone.

Rights of Passage is at times hopeful, but often emotive in its storytelling. Three narratives are pulled in and out of each other, each based around true stories from LGBT+ asylum seekers. Miremba was forced to marry and have a child with a man in Uganda who assaults her; Hamed is beaten and has his long hair cut with a knife in Iran; while Malaysian Izzuddin is stuck in a dilemma: if he admits to his relationship with his boyfriend, they will both be executed.

Seeking asylum in Britain, the three go through highs and pitfalls: one discovers G.A.Y and realises how lucky western culture is – comparatively, at least – while another has his sexuality denied because of lack of ‘evidence’ (even when the authorities are supplied with photos). Shunned by family and made to travel from city to city to find somewhere to stay, Miremba, Hamed and Izzuddin have stories that illuminate the very real prejudice and racism that’s present in modern-day British politics.

Rights of Passage is an important piece of theatre, telling these real-life tales with compassion that doesn’t detract from the experiences all three went through.