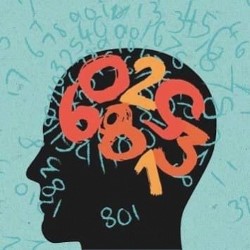 Jack kicks off by listing the things that he’s good at, like catching grapes in his mouth, eating scrambled eggs, knowing when someone is upset and football. Throughout Numbers, he becomes less and less sure of himself – except when it comes to numbers. He’s good at those.

Numbers is a play about OCD, but it’s also a lot more than that. It deals with toxic masculinity and how hard it can be to ask for help, let alone realise you actually need it. Jack, played by Henry Waddon, is in therapy, but his story twists and turns in and out of the past and present. He has a hard-partying mate who won’t take no for an answer and a girlfriend, Brianna (played by Abi Harindra), who doesn’t really understand his mental illness, mainly because Jack doesn’t understand himself.

As Numbers wears on and Jack becomes increasingly isolated and confused, Waddon presents a stunning portrait of a man truly in peril. Hope comes in the shape of Michael (Joe Woodman), whose own story unravels slowly and surprisingly. The two are at odds and, eventually, Jack has to take ownership of his own life.

Waddon, Harindra and Woodman are each refreshing and raw, well suited to the series of monologues laid out in Numbers. Mental illness is portrayed much in the same way it’s experienced in real life: with some shame, oversharing, passion and hope. Numbers is never patronising and ultimately uplifting.