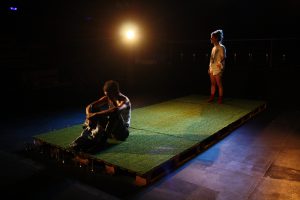 Two lonely people are telling their breaking-point stories. He’s a marketer with a hammer; she is a logger who can’t sleep. They recount their day-to-day lives, lifting themselves from the quotidian to stark, filmic scenes straight from a Wes Anderson movie. Their monologues are lyrical and filled with straight-faced advice: ‘Sitting in the dark on your own isn’t dealing with your problems.’ Observational office humour is lifted to frantic heights as life begins to unravel, and the two onstage slink around and about each other, making beautiful use of comic timing.

While bleakness reigns, there’s still space for humour, albeit deadpan and unflinching. Who doesn’t relate to being stuck in an endless 9-5 with no relief? Who hasn’t dreamt of throwing their co-worker out the window and setting them on fire? The future isn’t bright for young people today, and No One is Coming to Save You explores society’s endless decline through a duo who have no power and no say.

Their stories are poetic dreamscapes that morph into nightmares before they find each other. At the end, there’s a very sweet period where the cast break the fourth wall to read audience suggestions on how to feel okay again: opening your eyes in the sea; cooking a roast; riding a bike in the countryside; stargazing – and a sliver of hope shines through.