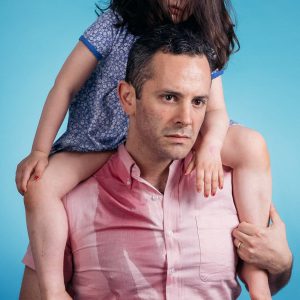 It starts off innocuously enough. A man is discussing his daughter’s birth. A difficult job for his wife, by all accounts, and the man makes it all about him, of course. Typical, etc. The fierce possessiveness he feels at the first sight of his daughter is our first warning sign, though we don’t know that yet.

The man, played by Adam Lazarus, runs through all the things he’s done wrong in life: harmful pranks he’s played, sex bars and strip clubs he’s visited, those moments when he accidentally hurts his daughter. To begin with, he invites the audience in: ‘Are you okay that I did that?’ As Daughter creeps on, the audience is quieter and quieter in their agreement.

This is a look at how we speak about women. ‘How do you make a hormone? Shove a rusty fucking rake up her cunt.’ Is that better or worse than: ‘Everything I do, I do it for you. I will not apologise for protecting you,’ when ‘protecting’, in this sense, involves harming other children, beating up other parents, and terrifying the very person you’re supposed to be looking after? This overwhelming aggression is interspersed with: ‘It’s not fair. It’s stupid,’ in response to his daughter’s fear of him.

This is a depiction of a man who hates women, and he doesn’t even realise it until a violent, raging crescendo. The fact that the world is filled with these types of men is terrifying. The fact that it takes a man to point out what women have been saying for years in order for people to take it seriously is even scarier.