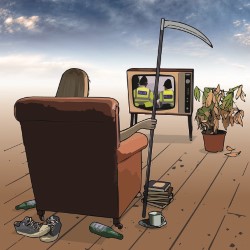 ‘What drew me to the play was the original viewpoint we get about suicide,’ says Daniel Crespin, one of the cast members of Elvin Acting Theatre Company’s Void. ‘It is from the perspective of characters who have either intentionally or unintentionally taken their own life.’

There’s a stark polarity interwoven through Void, as the other points of view in the show are those of the ones left behind. The play explores why someone might choose to take their own life and the multitude of reasons there are behind this decision. Three stories intertwine, all dealing with the issue of suicide.

‘It is a moving and incredibly important piece in my opinion, but it is also darkly comic and at times surreal,’ says Crespin. ‘It’s a stark and honest look at the important and widespread issue of suicide, with some rather jazzy dance moves at points, a peek at the supernatural and a rather awkward scene involving a hoover.’

It’s still shocking to hear that the leading cause of death in men under the age of 50 in the UK is suicide. Crespin, like most others, doesn’t understand why we aren’t talking about it more and finding ways to help the people who need it.

‘We talk openly about cancer and other causes of death, yet the one thing that is killing men the most in this country is themselves. It’s something many feel uncomfortable addressing,’ he says. ‘We have to start questioning why this is and talking openly about it. It shouldn’t be a taboo subject anymore, because it is simply a harsh reality, and beginning to talk about it might just save a life.’

Void promises dark humour and tragedy mixed up, as they often are, to make the telling of difficult stories that bit more palatable.

‘I think humour is one of the beautiful things humans use to work through grief and tragedy. We laugh with ageing relatives about the prospect of death, we laugh at certain misfortunes in order to begin working through them and humour helps us take comfort in certain painful emotions. Often the most difficult realities are too painful to talk morbidly about, and so humour is a way to face them and shed new light on them. I think British and Irish writers in particular use dark humour so effectively in order to explore tragic events and themes.’

For Crespin, who has been living with mental ill health since he was 14, being involved with Void has been an important experience. The company is open, honest and caring, and the subject matter is one he hopes will help people who might be struggling. The arts, he says, are important when it comes to expressing difficult feelings.

‘I hope for a day in the future where we can all talk openly about mental health – although we are making progress,’ he says. ‘However, I do believe theatre and other art forms make it easier for us to try to process this issue, as it can understandably be difficult to talk openly with loved ones or strangers about such a personal issue. It can leave people feeling very vulnerable, so I think the catharsis we can find in theatre is so important for people, especially those that are struggling themselves.’

The main thing Crespin – and everyone else involved with Void – hopes is that the show sparks something in audiences’ minds, whether that’s beginning to talk about suicide, thoughts and ideations, or considering their own feelings about the subject.

‘Theatre is such a subjective art form and every person will take something different from Void. I hope they feel the same catharsis watching it that I have felt working on it.’