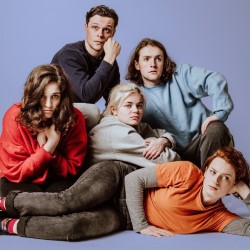 Set in a psychiatric ward, Going Slightly Mad is a play based on real-life events that takes a fearless look at what needs to change in the UK’s mental health services. We spoke to Producer and Set Designer Katrina Woolley about how humour can help with mental illness and the need for better education across the board.

Going Slightly Mad is an honest and unflinching account of the mental health services in the United Kingdom, set in a psychiatric ward and based on real-life people and events. The show has been written and directed by University of Edinburgh undergraduate Michael Hajiantonis about his experience of being sectioned in 2017. It is both humorous and uncompromising in equal measure, and aims to give a realistic depiction of something most people have little understanding of.

On mental health in the show

Going Slightly Mad depicts mental illness without being alienating or bleak, and presents characters with mental illness who are genuine and relatable. Because it is based on real experiences, it is an honest account of what it is like to have psychosis and mania, and to be sectioned and live in a ward with other people who are also struggling with mental ill health.

On using humour to depict sadness

Humour can be a valuable tool to engage an audience and break down the barriers that people often put up when watching anything with particularly difficult themes, and this is definitely part of why Going Slightly Mad and other such shows include it. But humour is also an honest part of many experiences of mental illness, especially in the context of psychosis, where one’s thoughts and behaviour are surreal and intensified, and when different people with different types of psychosis are all living together. Mental illness can break down the barriers of what is socially acceptable, so seeing characters who are mentally unwell make jokes that seem dark or inappropriate makes complete sense.

In the case of Going Slightly Mad, it is a matter of showing being easier than telling. Michael’s experience was something hard to describe but he wanted to be able to explain it to those around him in a way that was more tangible. The production also includes less naturalistic elements such as physical theatre sequences, which aim to reflect some of the most difficult-to-describe aspects of psychosis itself and of being on medication. Theatre also allows a sense of different voices and people to be represented in a way that one person talking cannot, and it was definitely important to Michael to have more than just his own experience reflected and to show the other people in the ward as just as rounded and relatable as Max, who is based on himself.

On the UK’s mental health services

The first thing is funding: the services are incredibly stretched. This is something touched on in the play as the ward in which it’s set is only meant to be a temporary placement for patients who are being assessed, but since the wards they should be sent to have no beds they are not able to move. Increasing awareness of mental illness is also crucial. Many people would have no idea what was happening if they or their loved one started to present signs of psychosis or any other mental illness. Better education around mental health would inevitably lead to better awareness, less stigma, more people recognising that they might need help and being able to access that help.

On using theatre to deal with mental ill health

Personally I have been struggling with my mental health since a couple of years before working on Going Slightly Mad, and I have created theatre based on real-life experiences of mental illness before with Big Mind. My experiences have been very different from Michael’s, but working on this production has definitely contributed to a sense of proactivity, a feeling that I’m actively working to end stigma and giving others a voice and something to connect to. Making work about it also definitely helps make mental health feel easier to talk about which in turn makes it easier to deal with.

On the show’s message

We want people to know that people who experience extreme mental ill health are just like anyone else and deserve understanding and respect. That mental illness is something that should be talked about more. And if they are struggling with their own mental health, that they are not alone and that their experiences are important and recognised.

We want audiences to see Going Slightly Mad because it is a truly balanced account of mental illness and gives insight into what it is like in a psychiatric ward, something which will be foreign to most people. And because it is also a wonderfully conceived and performed show which has been created with beautiful intentions and results.

As a company, Big Mind Theatre have also developed the Anxiety-Free Fringe Guide as a resource for people visiting the Edinburgh Fringe to help them look after their mental wellbeing.