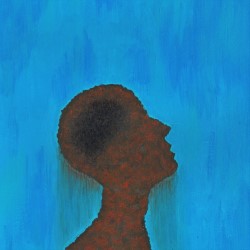 Rust is based on the personal experiences of co-writer Helena Fox and the month she spent in rehab. We caught up with Helena to talk about real-life versus fiction in theatre, addiction, and using music to express difficult emotions.

What can audiences expect from Rust?

Rust is an hour-long musical which follows Evie, a 20-year-old with a history of eating disorders and self-harm, as she undergoes 28 days’ treatment in a rehab centre. We’ve got an incredible cast of eight and a live band. It’s a hard-hitting and honest portrayal of mental illnesses, but with recovery as its core. It focuses on the joy of human connection – with a really fun number by an ex-drag queen, for example – and is life-affirming, too.

The show is based on personal experiences – how does the blurring of reality and fiction help to tell the story?

It has been interesting creating something that works as a dramatic piece but is so heavily based on real life. After I had drafted the book, Geraint and I spent a long time scrutinising the show and making sure it would be effective on stage. A lot of the protagonist’s feelings were written using my old diary entries or things I remembered thinking while I was unwell, and this is what I hope will give Rust its authenticity. With human relationships at the centre of the production, a few of the characters are drawn from people I met while I was in rehab, and some are entirely fictional. This balance ensures the story works on stage while also being honest and raw.

In what ways does the show explore themes of addiction and how it relates to mental health?

Rust really seeks to expose the humans behind mental illnesses. There’s a principle in Twelve Step Fellowships (Alcoholics Anonymous, Narcotics Anonymous etc.) that talks about ‘looking for the similarities, not the differences’ between yourself and others, and I think this really comes across in the show in terms of the shared experiences characters have had despite being unwell with different things in conventional terms. There’s one song where the characters’ experiences with their illnesses, including drug addiction, alcoholism and eating disorders, all intertwine, showing the commonalities between everyone.

These are such crucial topics to discuss at the moment – we are in crisis, with mental illnesses of all kinds not being treated by overstretched services. Indeed, we have a character in the show who serves a quasi-political role, voicing this crisis and almost giving the audience a call to arms.

How does talking about mental illness through the medium of theatre make it an easier (or harder) conversation?

Theatre is an undeniably effective way to engage people, which is why it’s ideal for telling a story that aims to be thought-provoking. Because Rust is a musical, we also get to utilise music to explore these themes, and music can often be more powerful than words alone. As a company, we’ve also discussed a lot how things are often more tangible or it’s easier to self-reflect when something is presented to you at a slight distance, and so a theatre piece has the potential to encourage introspection where something like, say, a speech, might struggle to do so. We had audience members contact us after our preview performance on 30th July to say that Rust really helped to open their eyes, or those of a family member, and I think this exemplifies the power of theatre when it comes to discussing difficult topics.

Did writing the show help you confront any mental health issues you might have been struggling with?

It’s actually been an incredible talisman for me, with some of the songs beginning to become anthemic for me and my recovery. My month in rehab totally turned my life around, and I’ve continued to progress in my recovery since then, and being able to write songs that touch on this process has been such a privilege. For instance, the penultimate song of Rust is two characters discovering all the things their bodies can do outside of their illnesses: ‘These feet can travel over earth. These organs can breathe and bleed and give birth. This tongue can savour a taste. This body will move mountains . . . ’ I wrote the lyrics as a true celebration of all my body can do, and how I don’t need to hurt it, and I think the song will continue to be a real anthem to me as I leave my own battles with my eating disorder and self harm behind, and I hope it can be the same for others, too.

How have audiences been reacting to Rust?

Rust is so timely and relevant, and it also does a lot of work to bust myths about rehab and mental illness, and I truly believe it has something to say to everyone. We received a standing ovation at our preview, and some incredible feedback:

‘The greatest and most important show I’ve ever seen.’

‘It really did blow me away and I haven’t been able to think about anything else all day!’

‘You made us laugh and cry.’

‘What an amazing cast and so beautifully written and directed.’

‘Thank you so much for bringing this story to the stage.’

‘Emotional, moving, powerful and uplifting all at once.’

The whole company truly believes we are doing something very important with this show.

What would you like audiences to leave the show feeling?

I would love for the audience to leave feeling moved and reflective, but also with hope for the future, be that for themselves, for a loved one, or for the state of mental health in our society in general. I hope they enjoy the Rust’s humour and joyful moments, but would also recommend that they bring tissues!