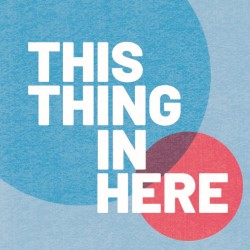 There’s a running theme in This Thing in Here about finding things, no matter how insignificant they seem, to make you happy. Harry Jackson, playwright and producer, is hopeful that the show will prompt some meaningful post-performance discussions.

‘I’d love for people to start making their own lists. Mindfulness is something that’s becoming a lot more common and I think it can be things as simple as that, as taking the time to remind yourself of the little things that keep you afloat when you’re feeling low.’

These lists would be prompted by Lucy, the protagonist of The Thing in Here, who’s getting ready to go to a party with her best friend, but is experiencing a pretty bad depressive episode. As she tries to explain, a woman from 18th-century Paris enters to talk about her own life of depression.

‘They’re joined by other people from different periods of history who each have their own experiences and stories to tell, which give our protagonist new perspectives to help reflect on her own mental health and realise that she is not alone or insignificant because of how she feels,’ says Jackson. ‘I wanted the show to be as honest as possible, and I also know that my experience with depression doesn’t reflect everyone’s experience with depression so in order to present different viewpoints I reached out to people I know who have also had a history of mental health issues who then told me their stories which directly feed into the show.’

This Thing in Here is one long continuous scene, portrayed, Jackson hopes, as a warm conversation with friends. The idea of using characters from the past came about as a way to make the thoughts and feelings expressed as engaging as possible. Framing mental health around people who lived in the past shapes the conversation as something potentially alien or different which, over the course of the show, becomes accessible and normal.

‘I really just hope we’ve presented these ideas in a way that comes across as honest. We’re not really trying to revolutionise anything, just take these very real experiences and put them forward. It’s hopefully thought-provoking and if people find moments or ideas that they haven’t really heard expressed before, that’s amazing.’

Jackson admits he’s got a natural tendency to make jokes when having conversations about mental illness – jokes which might come from a place of discomfort or deflection.

‘I think it does, ultimately, help to facilitate those conversations that would otherwise seem impossible. I suppose it’s the whole “spoonful of sugar” thing, with humour really being a great entry into those tough subjects,’ he says. ‘Humour and sadness also do a really good job of putting each other into perspective. Once you’ve known one end of the spectrum it gets a lot easier to appreciate the other.’

There’s an importance, Jackson stresses, in ensuring not to suggest that living with depression simply means being sad all the time. Whenever he felt moments of happiness, despite experiencing depression, he felt as though it almost invalidated his diagnosis. When he stopped feeling guilty about being happy, it was an important moment.

‘One of the biggest lessons I’ve learned in my own journey with mental health issues is that healing isn’t linear, it’s normal to slip up or feel like you’re moving backwards. Ups and downs are very normal, it’s all part of the journey.’

Jackson hopes This Thing in Here can act as a way into the mental illness conversation for some people. Having experienced what it’s like to find the subject difficult to talk about, he views theatre as an indirect way of having a direct chat.

‘Something that may stem from a very personal and individual place can hopefully be taken by an audience member and applied to their own situation,’ he says. ‘There’s also a level of detachment and distance, where rather than only processing these things internally, which I find can be really frustrating and end up just going round and round in a bit of a tangle in your brain, you can step back and see things laid out in the much more linear way that theatre allows with a beginning, middle and end.’

‘The Fringe is obviously a pretty hectic place, with so many different artists coming together from all over, so if you’re looking to take 45 minutes to pause, reflect on a subject that we all need to feel more comfortable with then come and see This Thing in Here. It gets sad, it gets funny and ultimately it’s hopeful, that no matter what you’re going through, you’re not alone and there’s a way out the other side.’