Fringe interview: Genevieve Carver – A Beautiful Way to be Crazy 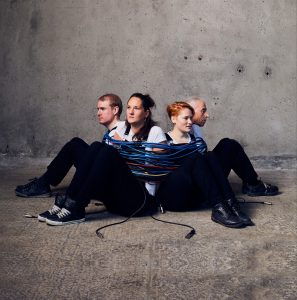 Award-winning poet Genevieve Carver has teamed up with multi-talented multi-instrumentalists to present a unique new piece of gig theatre exploring mental health, female working relationships and toxic masculinity, all with a beautiful soul/classical/pop soundtrack. We spoke to Genevieve about how the show came to be, the downsides of the music industry and gender stereotypes in modern society.

On A Beautiful Way to be Crazy

The show is a fusion of poetry, music and theatre exploring female experiences in the music industry. I researched it by interviewing almost 50 female and non-binary music practitioners, and verbatim audio clips from these interviews punctuate the show. The performance combines spoken word and a central narrative thread performed by me with live music from three musicians (Ruth Nicholson, Tim Knowles and Brian Bestall – who play at least twice as many instruments as that, in styles ranging from pop to classical, rock and experimental electronica).

When I was conducting the interviews I started to realise a lot of things about my own journey into performing – the confidence I lacked as a younger woman, the way I always felt the need to apologise for taking up space. The narrative I began to form around the interview responses therefore became my own story, beginning with teenage insecurities and school bullies, moving through mental health struggles and finally learning how to be OK with being myself (with the help of Joni Mitchell). It’s a vulnerable, honest performance – including reading some of my real teenage diaries out on stage – which I hope succeeds in combining the personal with the bigger picture.

On combining poetry and live music to create a theatre show

Poetry is where I feel most at home in my practice, so my creative process usually begins with words – the first thing I did was to draft poems in response to the interview research I’d done. However, I’ve been working with the band for a few years now and the process has become really collaborative. I was working away in Greece when I was writing the beginnings of the show, so I’d send videos to them, mostly of the words I’d started putting down, but also messing around with melodies and chords. By the time we came together we had loads of ideas bouncing around and a good idea of the feel we wanted for each piece, so the music came quite quickly.

It was after this stage that we realised we needed something to tie all this content together, and that’s where the theatrical element came in. I wanted this to be much more like a theatre experience than a reading or recital – I wanted the audience to be taken right in – so I wrote a scripted story tying together all the poems, based on my own journey into performing. We worked with theatre director Natalie Quatermass, who really helped us to put in subtle elements to lift the performance, so that rather than simply playing instruments and talking we are embodying ideas and characters represented in the music through movement and performative playing.

The mental health angle mainly concerns anxiety and depression, specifically in relation to creative practice. When I was researching the show I read a report from Music Minds Matter called Can Music Make You Sick? about how music has one of the worst rates of mental health compared to other industries. It’s also one of the few industries where female suicide is more common than male. A lot of the musicians I spoke to talked about financial instability, long and antisocial hours, alcohol and drug use, sexual harassment, and above all an inability to separate the perceived success or failure of your art from your self-worth as a person.

My initial aim in researching the show was to figure out why the music industry in the UK is still 70% male, but so many other issues came up when I started talking to people. The general feeling amongst people I spoke to was that gender stereotypes are so ingrained in our culture that it impacts on the things we feel we can and can’t do at a subconscious level, and it’s bad for all genders. For example I spoke to Trans women who had hated the expectations that society had placed on them when they were trying to conform as men. Most of the team behind A Beautiful Way to be Crazy are female, but two of the band are male, which was a deliberate decision because we feel it’s important not to exclude men from discussions about gender equality. We touch on the story of Ike Turner, who was famously abusive to Tina Turner, but the angle we take, rather than simply pointing the finger, is asking what makes someone become abusive? What are we doing as a society to make people behave like that?

Female working relationships was another interesting topic that came up, because people’s views were so polarised – some women spoke about a kind of magic when working with other women, but for others there was also this dark, bitchy side. There are obviously no hard and fast rules you can generalise about men and women but there’s also no denying that gender can impact hugely who we are and how we relate to other people.

For me poetry is how to get at something when normal speech isn’t good enough – it’s a way of expressing in words what can’t be expressed within the parameters of social and grammatical conventions. So if you’re talking about mental health or any other difficult topic, I think it offers more space for nuance and interpretation – like music, it deals in feelings rather than absolutes.

When I started, I was supposed to be writing a show about other people, but only through doing that did I realise there were a lot of things I wanted to say about my own experiences, including struggles with anxiety and low self-esteem. After the first time we performed the show in full, I hated it. I’ve never felt like that about something I’ve made before, where I really felt like it was this monster I’d created that was now destroying me from the inside. I know that sounds dramatic, but that’s how it felt, I had to step away from it for a couple of months before deciding whether to go on with it, but I’m glad I did.

The most common response we get from audiences is “I’ve never seen anything like this before”. I think the format we have is really original, with the poetry, music and theatre elements really working together to tell the story. One big reason to see the show is my super-talented band – just to watch them switching between instruments and styles is a show in itself. Another strength is the combination of the very candid, personal story alongside the input from a much bigger community.

Despite some of the difficult topics I’ve mentioned, this show has a really positive message. It’s the show I wish 14-year-old me could have seen when she was struggling with trying to conform to what she thought other people wanted her to be. Our main aim is to inspire confidence and creativity in anyone who feels they may face barriers in being true to themselves.

After Edinburgh Fringe we’re planning to tour, so if there are any programmers out there interested in bringing A Beautiful Way to be Crazy to a venue or festival, we’d love to hear from you. You can also keep updated with all our news and upcoming shows by following @theunsungpoetry on Twitter, Facebook and Instagram.