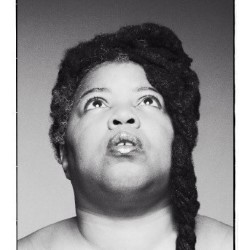 Cheryl Martin’s show, Alaska, is named after a line in the Lou Reed song ‘Caroline Says II’. ‘It’s so cold in Alaska.’ It’s a reference to Martin’s emotions, which often feel cold and numb before something happens to warm them up again. Alaska is about what it was like for Martin growing up with severe depression.

‘It’s very intimate. The audience are seated in a little circle and I’m part of the circle with you just telling you stories from my life,’ she says. ‘It’s very storytelling. I get up and dance at one point and I sing a couple of times.’

Some of the stories might involve Martin’s early years – she noticed things weren’t quite right when she was about 8 or 9; then came her teen years, when her mental illness really took off; and the time she spent at college in the states and at Cambridge University.

‘That was really great, simply because I’m black and a woman. In the early ’80s there weren’t that many black people going to Cambridge. Unfortunately, like a like of other people, I had a full-on breakdown while I was there, attempted suicide and ended up in an asylum called Fulbourne,’ says Martin. ‘I also talk about wishing I could live on the moon. There’s a lot of beautiful and funny things in Alaska as well. People think when you’re depressed that you’re miserable all the time, and when I’m ill that might be true. But most of the time, I find a lot of things funny, including things about my condition.’

As well as depression, Martin has a borderline personality disorder diagnosis. And while Alaska isn’t particularly about BPD, a lot of how she thinks and feels about her mental illness has come about because of this condition and the ways in which people talk about it and treat it.

‘I know that’s a controversial diagnosis. But when those doctors said borderline personality disorder, they knew me inside out without me telling them anything. They knew everything, including stuff that I’d never told anybody that I knew. In my life, the doctors that specialised in borderline are the only people to be able to do anything that worked. That was true when I was 27; I’m now 59 and it’s still true.’

Martin recalls being outraged by an article published by a major UK newspaper where it was posited that people with borderline personality disorder were incapable of empathy, barreling through life unconcerned with who they hurt and how they hurt them.

‘Wasn’t it awful?’ she asks. ‘As if the worst thing that could ever happen to you is getting a borderline diagnosis. And you should do anything on earth to avoid that. I’ve always been angry about that. When I was diagnosed back in 1987, they thought personality disorders couldn’t be treated. I actually had a psychologist for 15 years and at the end of the 15 years, he said there wasn’t enough of me there to do proper therapy with. And I just thought: “What have you been doing for 15 years?” There are many things that I’ve been flabbergasted by, but that one really cut.’

This distancing from attempting to treat her, or unwillingness to try to look beyond stereotypes and untruths meant that for a while Martin shut down and stopped talking to people about her mental illness. Her parents weren’t interested and, as the oldest child, she didn’t want to upset her brothers and sisters. It’s a large part of why she moved from the states to the UK – she didn’t want people to see how ill she was getting. Throughout her life, writing, theatre and poetry have been her go-to tools for confronting and working through how she feels.

‘Writing Alaska helped me look at what really happened and stop trying to pretend it wasn’t as bad as it was, cos it was pretty bad,’ she says. ‘Instead of it controlling you, for a little while at least, you’ve got control of it. I originally wrote it for some sort of communication and control for myself. The reason I keep doing it is because there are a lot of young women in their ’20s now who are going through what I went through then who don’t have anyone to talk to.’

That’s why the show is so intimate, and also why there are flashes of humour in Alaska. Martin laughs when she thinks about the way she was when she was studying at Cambridge, calling herself a stereotypical depressed girl – essentially what we would recognise these days as ‘sad girl aesthetic’.

‘I did my dissertation on Sylvia Plath and Stevie Smith. That’s hilarious to me now,’ she says. ‘I did everything but have a seal on my forehead saying “I am a serious depressive”. When you’re having a dreadful time, there are things that happen that are so absurd. Absurd is a more suitable word than “funny”. I didn’t think it was funny at the time. But I can laugh now.’

Martin created and performs Alaska for the young women who don’t have people to talk to; for the ones who are ‘like us and living with it’. She points out that she did not implode in her ’20s, despite how much it felt like she would, and that she didn’t even get really effective therapy until she was in her ’50s.

‘And I managed to have a life in between that. I think that’s the terrible thing when you’re young: the sense that you can’t live through this because it’s so awful. And you feel so all on your own. And I want them to know that they’re not alone, that there are places you can go and things you can do. It is possible.’