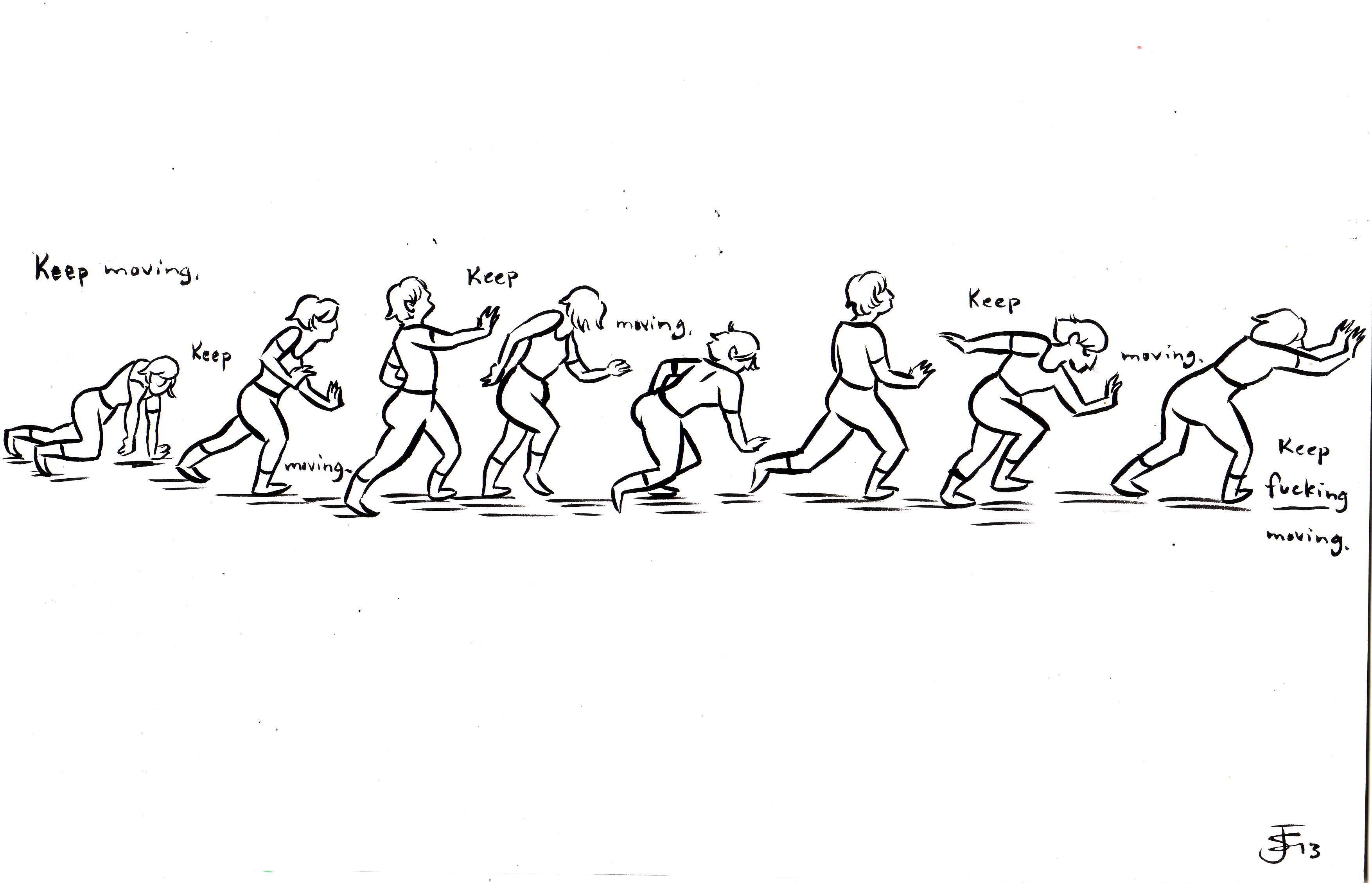 The illustrator Jules Scheele is midway through moving into a new flat in Glasgow’s Southside when we speak on the phone.

‘I’m unpacked now at least,’ they say through a very relieved-sounding exhale. ‘I’ve carried certain weird postcards and pictures around since I was 16. I don’t feel grounded until they’re up on the wall. There’s a B52s postcard, an old photo of my grandma, science stuff by other artists . . . I’m someone that really needs a home, and my things around me. Living out of a suitcase was exciting for about a month, after that I started getting edgy — it didn’t help my mental health.’

Scheele’s been creating comic books, zines, and illustrations for over a decade now, often dealing with messy emotions and more complex mental health issues. Their work in the past has covered bad breakups, dating, anxiety, gender roles, identity crises, and depression.

‘I suffer from an anxiety disorder, which I don’t mind talking about. I do a lot of autobiographical comics so it’s all out there already. I’ve always used doodling as a way to get things straight in my head.’

Scheele was working at Forbidden Planet in London when they began drawing as a way of coping with a lot of changes and stress.

‘I didn’t sit down and decide to do that, it happened naturally. I enjoyed reading comics about other people’s lives. It made me realise how common anxiety and depression was. It all seemed very relatable and made me feel less weird. I was surrounded by this little community of illustrators and that’s when I started self-publishing.’

Over the years, drawing for themself expanded into a full-time job, leading to graphic design work and commercial projects including an animated video about the NHS. In 2014 Scheele and a friend set up One Beat, a zine-making collective whose aim was ‘to produce anthologies and distribute cheap-and-cheerful zines by women with strong intersectional feminist voices, and to work with women of all ages and backgrounds.’ They also illustrated Queer: A Graphic History, a non-fiction comic book about queer thought and activism, written by Dr Meg-John Barker.

‘My work varies. Some of my freelance work can be almost mechanic so that’s okay, but if I’m having a bad mental health phase, the personal projects — which need much more input — can be really hard. That misconception about depression making you more creative is really damaging and not true.’

Scheele has gradually got better at coping with bad periods of anxiety. ‘I used to feel pressure to be “always on” and constantly productive. I’d beat myself up for running behind with work, for example. I’d start these cycles of self-hate when I felt I’d slipped up. Now when I feel tired and low, I take a break right away. I realise it’s not a personal failing, or some flaw in my character. My anxiety is an illness and I’m still working on ways of dealing with it.’

Although their first experience of taking anti-depressants back in 2010 wasn’t a success (they decided citalopram wasn’t for them and gave it up after three months), Scheele tried medication again this year. Facing a stressful phase as they moved from London to Scotland, Scheele was dealing with panic attacks and vivid anxiety dreams, so started taking sertraline. Although they felt nauseous for the first month, and emotionally numb, the side effects settled and it’s been helpful.

‘I had so much to do, I needed something to help me function. I also used an online CBT course and face-to-face therapy. Different people react differently to different meds, and also need different types of treatment. Finding a good therapist is like dating; you need to shop around for something that suits you.’

Besides NHS-prescribed treatments, Scheele says the next most important thing has been a solid friendship group.

‘It took me years to get here. And not everyone has that. I still need to go to professionals for help. But being around friends who can relate, who you can hang out with without needing to be entertaining, that’s a huge help. Performing is incredibly tiring.’

Scheele is glad illustration and comics have given them a place to speak honestly about what they’re going through.

‘It’s stigmatised to talk too much about mental health but for me it’s been essential. Friends have worried that it’ll put off future employers. I realise I don’t do well with people that repress stuff. Their mental health issues aren’t compatible with mine!’