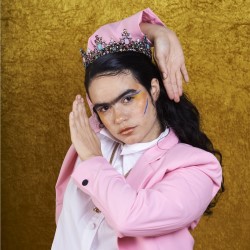 An opening scene, for example, has Spisto as a Harry Potter fanatic taking a class in muggle tools, while her Latinx frog teacher posits the idea that her own country’s magical traditions have been co-opted and monetised by middle-class white people. Similarly, there’s an ode to turning down cocaine on the weekends, with one line from Spisto acting a shaming reminder that where she’s from, cocaine is packaged in bodies like hers, then left discarded.

Throughout it all, Spisto is a fluid, malleable machine, bringing the audience along for each ride. One moment, we’re students taking roll call, next we’re the ocean to her writing mermaid, then we’re all dancing to reggaeton; a sweaty, twisting mass of people celebrating Spisto, her music and her spirit.

Spisto toes the spectrum of Fringe show tick-boxes. There are meaningful messages, sure, but they’re not forced or preachy, just dropped in, subtly, then we’re swept onto the next scene. Spisto also deals in unadulterated joy of cabaret. Whether it’s musical theatre, rap, ballet or Latinx rhythms, pride in her enjoyment of the artform is always evident. There’s a heart here, and that elevates Butch Princesa to soaring heights.