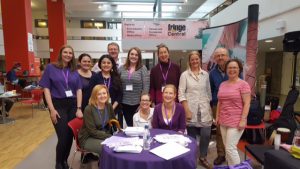 This is the second year of A Mentally Well Fringe. After being approached by Fringe Central in 2017, NHS Lothian and Division of Clinical Psychology within the British Psychological Society have banded together again to create a space for performers, as well as producers, writers – anybody involved in the Fringe – to find a safe space to take a couple of hours away from the busiest time of the year.

‘Some people seem to be getting on quite well,’ says Dr Alana Davis, who’s a Senior Clinical Psychologist with NHS Lothian. ‘Every other day they don’t do a show, or they’re here with a troupe of people for support. Someone from New Zealand said they’d found a group of other people from New Zealand, so there’s a sense of belonging there, too.’

There are plenty of ways you can make your Fringe experience mentally healthier – finding your tribe, remembering to rest, relying on a support system – and A Mentally Well Fringe is here to add to your arsenal. Located in Fringe Central, in the participants’ services area, there’s a wellspring of calm. On Friday 24th from 11.30am-1.30pm, you can dot from station to station and experience ways to look after your wellbeing not just during the Fringe, but long after August fades away.

The techniques the event provides are for the performers to top up their mental health. You don’t have to be diagnosed with anything: if you are interested, you’re welcome.

Some of the stands are intriguing: one that teaches about mindful movement has a stream of people doing a solo egg and spoon race, only this one isn’t a race; John asks people to slow down and not to drop the egg. Usually mindfulness practices ask us to notice if our mind wanders off somewhere; this one doesn’t. By taking part in a task where you’re forced to you focus on balancing an egg, a spoon, your speed, where you are and what surrounds you, the concept of mindfulness shines through. People speak of how their focus of attention encompasses how they move, how they lift and place their feet on the floor, all the while paying attention to the egg they are holding in front of them. Being in the moment – in tune with our internal world (thoughts, feelings) but not getting lost in these or feeling we must react to them immediately reconnecting with the present moment via our bodily sensations and our current surroundings is an important part of being mindful, so the egg and spoon race tells us to remember this instead of worrying or stressing about things that aren’t immediately solvable.

Each of these professionals can offer something unique to the wellbeing event, demonstrating the wide skill mix of people who deliver psychological therapy in the NHS, as well as the incredibly different options there are for people who would like to pursue therapy.

At the art therapy station there are screeds of paper, oils, chalk, pastels, pens and pencils. There’s the option to copy some rudimentary body shapes, colour in intricate patterns, or go rogue and doodle away yourself. It’s a way for people to express themselves if they can’t – or don’t – have the words to describe what they’re going through, says Kate, who’s running the station. She is encouraging and helpful, and so is Richard, who mans the music therapy spot. He speaks of working with autistic people: often they’ll sit at opposite ends of the room and communicate through music – a call-and-response conversation that soothes the patient.

As well as this, there are stalls providing a whole host of other evidence-based psychological interventions, as well as tips on relaxation, cognitive strategies, self-soothing and relating to others. Another stand is centred on unhelpful thinking styles.

‘When we’re under stress, all of us can slip into unhelpful thinking styles –  like catastrophising, ignoring positives and emphasising negatives, blaming ourselves, and overgeneralising’ says Dr Davis. ‘It happens to all of us, and we’re trying to normalise it a bit for people and say: “this is what everybody can go through under stress.” You have to learn to recognise when you have started to think in these type of unhelpful patterns. This will help you to start to generate alternative patterns of thinking which are more balanced, and less generalised.’

When it comes to the sorts of triggers that cause performers involved with the Fringe to experience poor mental health, Dr Davis is quick to answer. We know that those in the arts have poorer mental health even as undergraduates, in comparison to their peers. So there is a pre-existing vulnerability there already, which is likely to be exacerbated by the temporary nature of the work, the unsocial hours, then add to this the experience of being subject to constant reviews and potential criticism.

‘Late nights, not enough sleep, too much alcohol and other substances, as well as dealing with negative reviews.

Your whole routine is disrupted and you don’t have your usual safe space and structure of home. A performer I spoke to was doing three shows every day. That’s so intense and adrenaline-filled – how do you come down from that? How do you soothe yourself afterwards and bring your emotional arousal down?’

A Mentally Well Fringe has some techniques to help. The advice, have-a-go stations, and people to talk to are one part of it. The approaches they teach that you can take forward throughout the rest of the year and beyond are invaluable.