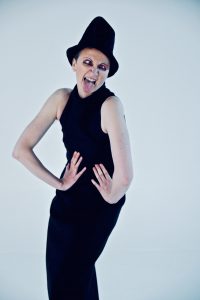 The SpiegelYurt is an unassuming little venue, next to the Potterrow Underpass and opposite Bob’s Blundabus. Step inside, however, and it’s a cosy, opulent space with benches laid out in a semi-circle and gentle twinkling lights. It only takes Lucy Hopkins and Bob Slayer about half a day to put the yurt up or take it down, and they plan to take it on their various post-Fringe journeys.

‘[The yurt] sprang up out of a need to create venues where acts could actually make money,’ Hopkins says. ‘It’s an important industry, and it’s important to do it really well and in a way that’s appropriate for your work. But it’s also really good, as artists, if we can make money, because then we can take creative risks. And if you can’t experiment creatively, you can’t do anything.’

Hopkins’ show, Lucy Hopkins: Secrt Circl, is the result of a lot of this creativity. She moves the yurt’s benches into a circle, so that everyone in the audience is included, then takes cues from them to mould the show into something a little different every night.

‘It’s an interactive ceremony of love,’ Hopkins says. ‘I’m a priestess, but I’m also a clown and an idiot. There’s lots of interaction with the audience, and lots of messing about, silly funnies and audience interaction.’

Secrt Circl was originally created as an antidote to artists’ experience of the Fringe, which can often have negative effects on emotions, finances and mental health. It functions as a space for play, where audiences can discover – or remember – what it is they love about live performance and about creating something from nothing.

‘It’s been a big surprise how much people have gone for it,’ Hopkins says. ‘I think we’re really hungry for ways to share time together that feel deep – and those times don’t have to be really solemn. We can fuck about with it as well.’

Fun and silliness are truly at the heart of Secrt Circl. The concept of silliness is something we’re encouraged to leave in childhood, but, as Hopkins says, it’s a fundamental part of play, and play is something that’s incredibly important in learning.

‘It’s really good for us. It’s the base of all creativity: asking ‘what if?’ Then daring to go after it. I would argue not only is it necessary, it’s imperative for all of our healths.’

This attitude, however, is one that has to run parallel to creativity and the arts being cut at an alarming rate across the country. Hopkins’ advice is to engage directly with what you love to do.

‘Activate it in yourself, as an immediate practice,’ she says. ‘There are a lot of community groups out there. Get out and see stuff and be in stuff. For me, the most important is reminding everybody that we are all artist and creators.

All we have to do is keep the torch lit. Make sure you’re sharing it with people who need a light. Waving it at people who’ve got one. Going close to the big fire from time to time to remember. That’s the plan. Keep the torch lit.’