Dave Chawner is an award-winning comic, published author and mental health campaigner. He’s been featured in the Guardian, the Independent, the Metro, Tomorrow’s World, Mental Health in the Metropolis, and BBC Breakfast. His Fringe show, Mental, is a vulnerable look at living with anorexia. Interview by Kirstyn Smith. 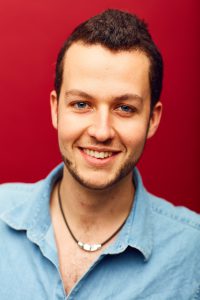 I always say it started at 17, but I don’t think it manifests overnight. But when I was 17 there were numerous different triggers. One of the bigger ones was that I really enjoyed my childhood, unlike, I think, a lot of mental health stories. I had a fucking great childhood. And I think I didn’t want that to end.

I got a lead role in a play and I had to lose a little bit of weight for it and everyone kept on telling me that I looked good. At that point, I had UCAS deadlines, I had exams, I had resits and coursework, and I didn’t feel good. I felt like I was on a conveyor belt with no way to stop it. I could see I was going to move away from my friends, who I got on with so well, my family, my girlfriend.

Anorexia became a subliminal response to my situation. Everything felt so big and challenging and out of my reach, that it was quite nice to have a distraction—something that was above life that I could do something about.

My relationship with anorexia would go in and out of focus. I decided to do a show about it because I wanted to use humour to engage people and to raise awareness of anorexia. I felt guilty meeting these people—these mothers, brothers, sisters, boyfriends—whose lives had been ravaged. And here was me, some little jumped up prick. So I had this massive relapse.

It was a very dangerous relapse, because I knew exactly what I was doing. The anorexia was a slow form of suicide, and I was very much aware of that and I started to speed up that process, started writing the letters and started getting the videos ready.

The only reason, honestly, I engaged with therapy was because of depression. Depression is shit. I felt rubbish for ages and I had sustained low moods, and there was one particular week where everything was perfect—everything I’d ever asked for was coming true. I just didn’t feel it at all and I went to the GP. In the end, a woman from Lambeth Talking Therapies said: ‘We’ll try and treat your depression, but I’m telling you now, it’ll do bugger all if you don’t see to the anorexia. Your brain doesn’t have the energy to release the endorphins.’ If you don’t charge your laptop, you can’t be annoyed it’s not working.

I was always really staunch that if I got offered treatment I would engaged to 100% of my ability. Although my BMI was low, it wasn’t a critical level. It’s hard to reconcile that it’s not actually a binary thing: it’s a sliding scale of severity, and that’s why I want to be the change that I don’t think was around. It’s not about BMIs, it’s not about waist size, it’s not about kilos, it’s about the impact it has on people’s lives. 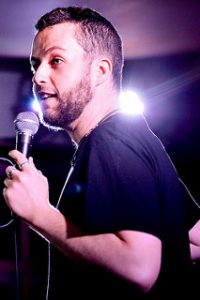 A key point in my recovery was instead of looking at it like losing the anorexia, I started seeing it as gaining my life back. One Thursday in March 2016, I remember feeling like I did all those years ago when I was in 6th form: silly and having fun, and I realised I used to really enjoy being that kind of person. Happy-go-lucky, silly, a bit cheeky, a bit of a lad. That was a critical turning point, realising the thing I’m gaining back is actually quite fun.

I hate to admit it, but I think one of my biggest triggers for anorexia was loneliness. I put pressure on myself to find a partner because I thought I would die alone. I hate that, because it’s the sort of shit that Hollywood spins up, and I don’t think you should ever put your recovery into somebody else’s hands. It put a hell of a lot of pressure on Una, my girlfriend, as well. Hopefully she’s going to be the girl that I spend the rest of my life with, and I think she was a huge turning point, but whether that’s helpful is a very different question.

I had a bit of a blip last year. I was really down and out, so Googled the Samaritans on my phone. The bloke picked up and I said: ‘Hi, I just feel so bad at the moment, I’ve had an argument with my girlfriend and I feel really guilty about it and I’m pushing people away and this is a constant pattern and I don’t know how to break it.’

The man said: ‘I’m really sorry, I’ve got to stop you, I think you’ve got the wrong number.’

I said: ‘But you said this was the Samaritans.’

And he went: ‘Yeah, the charity shop in Willesden Green. Would you like to make a donation?’

I feel a duty to say that I know there are a lot of men out there who feel that they get overlooked by the fact that perhaps there isn’t the presence or awareness for men. However, I’ve never been massively aligned with my gender, I’ve never really defined myself that much as a bloke. I’ve always been feminine and camp and, actually, that was one of the things I loved about the anorexia because I was always terrified of my own sexuality.

Being a straight bloke, I always felt that made me, by default, a bit of a pervert. Especially if you look in the media: Harvey Weinstein, upskirting, gender pay gaps—it’s an embarrassing gender to be. I’ve always been scared of my sex drive, and that was one of the things that came up in therapy: it’s okay to be a man and it’s okay to have a libido.

I broke my little finger a couple of years ago, and everyone was like: ‘Mate, you wanna get that checked out.’ I wish people had been like that with my mental health.

Although I do want to use humour to engage people who feel awkward or isolated or ostracised with eating disorders, I also want to educate people who’re lucky enough to have no experience about it. I strongly feel that the onus isn’t on the general public to go out there and learn about eating disorders, I honestly think it’s about people with lived experiences to make it interesting enough. I just have no dignity to lose—I’ve done stand-up for nearly 10 years—so how beautiful is it to combine the two: something that’s harrowing, has the highest mortality rate of any mental illness, and ravages families—and using humour to engage with that.