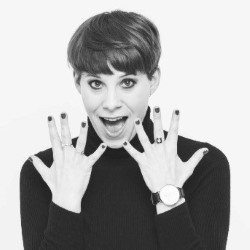 ‘The last thing you want is a happy comedian,’ Ruffell remarks at the top of her show. While this might be true if you abide by the old ‘comedy = tragedy + time adage, Ruffell wears her happiness well. She’s energetic – infectiously so – bounding across the stage, occasionally transforming her body into others’: her mum, or fellow comedian and best pal Tom Allen.

Ruffell’s 2018 show was about being a natural worrier, and it’s true that she has focused in on the less happy, more poignant sides of life before. Not that there’s none of that in Dance Like Everyone’s Watching, but she feels lighter and admits she’s in a good place these days. That doesn’t mean she can’t be funny, she can: razor sharp and light-footedly so. It’s a delicate mix. She speaks about carrying a backpack of shame around with her before she came out, but these days this backpack is more like one of those tiny fashionable ones from the 90s.

Dance Like Everyone’s Watching is like catching up with your talented and successful mate who’s always ready with a joke or advice. And even in the sweltering confines that is Pleasance Beside, Ruffell manages to remain cool as ice with a final punchline that’s near-perfect.