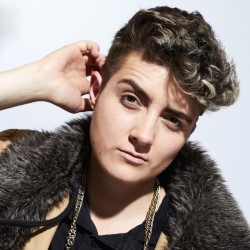 Former boybander and current pseudo woke modern man, Len Blanco is back for A Night with Len Blanco at the Palladium (he can’t believe it’s packed to the rafters). As a former member of pop quartet M4, he’s embarking on the chance to make right what he did wrong during the heady days of ‘90s fame. He has a good line in the right thing to say, nervously checking that he’s doing it right and removing all the suss bits from his biggest hit ‘Pop Dreams’.

Firing Blancs is right on time as we (still) continue to uncover the horrific actions of powerful men in Hollywood, music and sport. Len Gwyn (the person behind Blanco’s macho posturing) presents an exploration of one man’s view of gender and feminism in the modern age. Blanco thinks he’s ticking all the right boxes: he does yoga, isn’t that enough? Gwyn is encouraging the audience to think about people’s feminist facades. In an era where being a feminist wins you extra woke points – particularly if you’re a cis white man – we must always be calling out people to go a little deeper than slogan tees or hashtags.

Blanco is a dichotomous character and Gwyn dances the line between ‘man who genuinely thinks he’s doing good things with his heart in the right place’ and ‘insidious creep who doesn’t give a shit’. The songs are witty and Gwyn’s voice is great; their interactions with the audience are perfectly observed. Drag kings are a lesser-sung aspect of queer performance, so it’s refreshing to see an act who can deliver spot-on social commentary, oft-dark comedy and a takeaway message that’ll stay with you for some time.