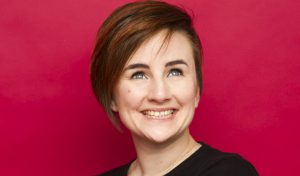 Laura Lexx’s Trying is a show packed with nostalgia – memories of growing up in the 80s, and holidays in the 90s: making friends in French campsites, Pez dispensers, snap-on bracelets. There’s real admiration and love for her family, particularly her sisters and brother, and as she shares snapshots of days gone by it feels like snooping through an old photo album.

Lexx has been trying for a baby for a few years, but instead of getting a baby, she got depression. She talks about her mental health without making a big deal out of it, joking about how she got postnatal depression without the baby, which makes her a bit of a hipster in that regard. To remind us that it’s okay to laugh about it, she’s prepared some signs: ‘We should laugh unless she kills herself.’ That kind of thing: her dry, witty asides, mixed with a no-nonsense sense of humour, have shades of Victoria Wood throughout.

Focusing on anxiety and depression, Lexx explains the dichotomy in realising there are two sides to her: the one who knows she would totally smash Live at the Apollo, and the one who can’t buy soap from a stranger. She admits she wants to use comedy to lift the lid on anti-depressants, and her amiable, conversational style is one way of making mental health and its varying themes more accessible for those who aren’t sure what to make of it. The gist of it all is that if we’re more honest in our own narratives, then other people won’t feel so alone and shitty in theirs.

The final section of Lexx’s show is a whirlwind of panic and worry, a massive simulated panic attack that’s tempered by the final line of the show. Lexx brings a sense of hope to the world of mental ill health, and is one to bear in mind for smart, self-aware storytelling.