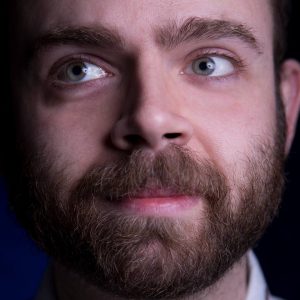 He doesn’t fit into a box, performance-wise. His show, Genre Fluid, is part poetry, part comedy, part Ted Talk. But, while this is something Webber’s had to face (particularly when applying to take part in festivals – what part of the programme do you go in?) it doesn’t matter to the audience. His words are a ride, gliding through intimate storytelling before surging into an eddy of intricate rhymes designed to trip up your mind.

Webber’s proud that he writes about life, love and relationships, even when his friends scoff that he just ‘writes poems about boys’. There’s more to it than simply mooning over 20-somethings: we’re transported to a house party and having to deal with a grown man using the T-word, then back to 14 years old, discovering Divine on TOTP 2 and the Rocky Horror Picture Show. Webber’s words are nostalgic, often achingly so, and relatable – often painfully.

‘Things will get better’ is a refrain. Poems that touch on mental health aren’t melancholic, just gently optimistic. Self-care, listening, doing better. The world is slowly changing, he notes, after witnessing a teenage boy unapologetically queer in ASDA. Even though gay dating in 2019 is a hellscape – as proven by screenshots of actual messages Webber’s been sent on Tinder and Grindr (“Receding hairline at 31? Yikes”), the world continues to slowly change. Things will get better.