Writing is hard. This writer knows it, other writers know it, Grace Millie knows it. But trying getting out a final draft of anything when you’ve got OCD is impossible.

‘It’s especially difficult when you’re writing about OCD and you’re trying to make sure you’re saying things that you want to say with it,’ says Grace, writer of Doubt, which is making its UK premiere at the Edinburgh Festival Fringe this year.

‘It has been a really good step in terms of catharsis, because I haven’t actually started CBT yet. I think writing this has enabled me to feel up to doing that.’

Doubt focuses on two journalists trying to write a positive story about the Good Friday Agreement. One believes it’s a perfect example of a completely and utterly solved problem. She avoids the news because she’s worried it will trigger her OCD. One can’t even fathom writing anything anymore due to being so paralysed by the 24-hour influx of information.

‘That was what inspired me to write it,’ says Grace. ‘I was seeing this obsessive news consumption and it reminded me a lot of the paralysis you can get from the compulsions of OCD. The whirlwind of content around us can produce this sense of a lack of power and a sense that you can’t do anything.’

On top of that, the whole concept of OCD is a difficult one to comprehend. It’s a very misrepresented illness, perhaps, says Grace, because of the myriad ways it can manifest. Her situation for example, is a familiar one for anyone going through the mill trying to get diagnosed. ‘I can see elements of it in my childhood, but it started properly when I was 18. I didn’t get diagnosed until I was 20. So there was a whole period in my life where I didn’t know what was going on.’ 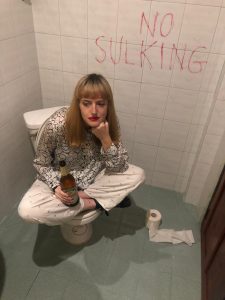 It began for Grace with external compulsions, the ones you might expect from OCD. Things like checking doors, checking lights, checking taps.

‘Then, the only way I can describe it was that it went internal. It became completely hidden even to me, and I didn’t even know what it was. I was just having all of these horrible intrusive thoughts. One of the reasons I wanted to write the show is because I don’t want anyone to have that feeling of not knowing what’s going on with them.’

One of the problems that lies with OCD and other complex mental illnesses is the difficulty in diagnosing them. Grace admits that GPs can just a very small amount of training on it. Added to this, people who live with OCD can often become very good at hiding it, simply because of the stigma that lies with it.

‘I really like that we’re focusing on destigmatising it,’ says Grace. ‘The way TV, films and theatre  portray OCD and mental illness in general is that they’re very much all-consuming main story lines. Doubt is about OCD, but it’s about other things as well. I do have a character in there who has it, the show does very much break down how it works, but I didn’t want it to be this OCD plot line, then there’s some kind of dramatic breakdown and then something happens that makes everything better.’

The news cycle story line is one Grace believes is quite zeitgeisty.

‘I think it will appeal to millennials. But I also think it is quite universal in terms of the fact that it now manifests in the external world,’ she says. ‘However, it’s internal, thought-process wise. It’s been around for a very long time, and it’s interesting that it’s spreading from within ourselves to the outside world now.’

When you write a show that deals with mental illness and the pressures and fears that come from an overly stimulated world, you must wonder how your words and actions and art affect the people who come to see it.