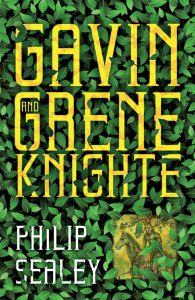 It’s a sharp New Year’s Eve aboard the Astarte, on a night that bubbles with unknown possibilities. On the boat, the employees of an upscale London bank embark on a late-night river cruise to ring in the new year. As is tradition, the oldest member of the team, the mysterious, composed Henley, is telling his annual end-of-year story.

His present-day retelling of the Arthurian tale, Sir Gawain and the Green Knight is masterful. And that’s where the book blossoms into something spectacular. As Henley’s story blooms, Sealey intertwines it with both the legend of Sir Gawain and Gavin and Greneknighte itself, exploring how one story can bleed in and out of another without anyone ever really realising.

Gavin and Greneknighte is a tumbling stream of oral literature. Henley’s tale focuses on Gavin, a man who takes on a bet from the legendary Greneknighte in which he must increase the value of his half of a gold bar more than Greneknighte can over the course of a year. Throughout his narrative, Henley is interrupted, contradicted and heckled, but refuses to back down, determined to finish his story before the fireworks begin.

Sealey creates a lush, verdant world lifted from legend but painted with modern brushstrokes. Impossibility bleeds into reality: can a man chop off his own head with no ill effects? What does the mistress of the house want with Gavin? How, exactly, does Henley know the ins and outs of this story?

In the book’s heartrending conclusion, Sealey poses the question: who dictates when a story is over? And, does it really matter? In this meandering, thought-provoking odyssey, Sealey has created a ride through an intriguing world of myth, legend and loyalty, proving that sometimes the journey is all you need.